(Regain Yemen Initiative) welcomes the US Treasury’s decision to impose sanctions on members of a smuggling network that helps finance the Iran’s Islamic Revolutionary Guard Corps-Qods Force (IRGC-QF) and the Houthis in Yemen, led by Houthi financier Sa’id Al-Jamal, residing in Iran and linked to a number of Yemeni elements.

It also welcomes the designation of the Swaid and Sons, a Yemen-based exchange house associated with the Houthis, which was used by the Houthis to smuggle and launder money, with the aim of supporting Houthi terrorist operations and prolonging the war in Yemen.

Through the network of Al-Jamal, who belongs to the Sana’a governorate, Hamdan district, according to our information, which indicates that Al-Jamal was transferred between Yemen, Iran and Lebanon, and then settled in Iran to establish a financial network under the supervision of the IRGC with the aim of supporting the Houthis by providing them with oil derivatives and commercial goods, as well as taking over Their money transfers in different countries. Information indicates that Al-Jamal is 42 years old and has been in Iran since 2009.

The step taken by the US, in imposing restrictions on people and companies, working to support the Houthis, and circumventing international resolutions, including UN Resolution 2216, in addition to working to smuggle money and transfer it to the Houthis with the aim of financing their terrorist operations against the people of Yemen, is an important step that may slightly tighten the noose on the financial resources of the Houthis.

Designation of the Swaid and Sons is also important because it is one of the most important sources of transferring and moving the funds of the Houthi leaders, as well as the looted funds from Iran to the Houthis, especially oil money, which is supervised and controlled by the Houthi spokesman, Muhammad Abdulsalam, and a number of Houthi leaders.

ON this regard, we have previously revealed in special reports that the Houthi group relies on complex money exchange and remittance companies in their financing, most notably, according to what the US Treasury reported, the Swaid and Sons Exchange Company, which was working to establish a commercial bank for the Houthi group in partnership with Muhammad Abdulsalam, leaders from Hezbollah, Iranian, Iraqi figures and other pro-Iranian merchants based in a neighboring country.

We at “Regain Yemen”, as we welcome this step, we demand the imposition of additional restrictions on Yemeni, Iranian and Lebanese businessmen and commercial companies, affiliated with the IRGC and the Houthis, working on smuggling drugs and weapons and laundering money, especially looted from the funds and companies of Yemeni citizens that confiscated by the Houthi terrorist group.

We had mentioned them in previous reports, and presented recommendations for that, which would stop the Houthi resources, which they use to finance their military operations, with the aim of prolonging the war in Yemen.

The (Regain Yemen Initiative) will work to issue its reports and activities in tracking Houthi funds and companies and their sources, and will work with all partners and relevant local and international bodies in tracking these illegal funds and demanding the return of rights to their owners, especially with the Houthi group operating more than 910 companies, exchange and transfers facilities.

We call for additional measures to be taken to prevent the Houthis’ financial transactions and smuggling of oil and weapons that encourage them to prolong the war in Yemen, and to reject initiatives aimed at bringing peace to Yemen.

We stress the need to establish an international committee that works to limit these violations, recover the funds looted by the Houthis, take the companies back to their owners, and monitor their work and correspondence with foreign companies.

Issued by the (Regain Yemen Initiative) 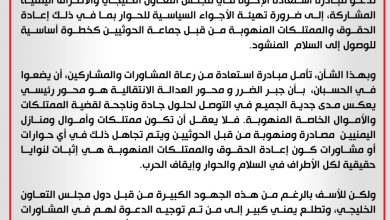 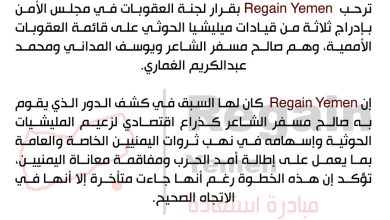 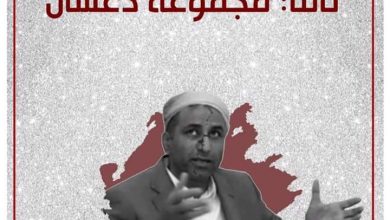